(from In and Out of Context exhibition)

"pear in bowl (Gaelynn Lea)", digital photographic print, 2016  (from In and Out of Context exhibition)

"In and Out of Context", published 2016, White's 2017 NEMBA award winning book of photographs.

Tim White is a Duluth-based artist, arts advocate, and writer. His essays on contemporary art can be found in B&W Magazine, and MnArtists.org. His images have been published in Shots Magazine, La Pura Vida, and The Sun Magazine. They are part of numerous private collections as well as The Tweed Museum of Art.

In 2016, White published his first book, In and Out of Context, which paired his photographs with texts from 21 Northland poets, songwriters, and prose artists. The work received a 2017 Northeastern Minnesota Book Award, and is held by the Weisman Art Museum, and the Walker Art Center. In the book’s foreword artist and author Ann Klefstad submits that "I recognized in White’s work that it had the elegiac aesthetic of, say, JoAnn Verburg but that it combined this with the helpless engagement with the human and mortal condition... (it) continues the spare, compelled recognition of the human body in the grip of its dual nature: an animal in the natural world; a mind or soul in a world of human making.”

White was recently profiled on Public Television's "The Playlist,” and is featured on the cover of Ryan Vine’s 2018 collection of poetry To Keep Him Hidden. He is currently working on his second book, North.

Tim White and Allen Killian Moore: A dialogue between the “still” and “moving” image.  An extended discussion on our YouTube channel.

January 2012, Traffic Zone,  "You are not a dinosaur," Minneapolis, MN

February 2011, Vine Arts Center, "You are not a dinosaur," Minneapolis, MN

May 2010, Some Quiet Advice [a show of international photographs], Ithaca, NY

2017 Northeastern Minnesota Book Award, “In and Out of Context,”  Honorable Mention.

From WDSE, www.theplaylistonline.org. Photographer Tim White takes us through his exhibition, In and Out of Context. 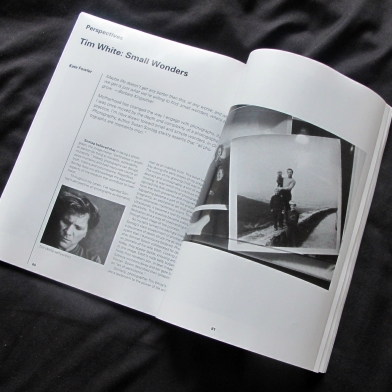 In the current (December) issue of Black & White magazine, there is an excellent feature on Tim White's photography.