These caves have organic, white, honeycomb-like interiors punctuated by archways, columns, and windows. Light from openings in the walls filters in and shifts around the softened shapes of the interiors, creating changing envelopes of space. The Parfleche wall reliefs are influenced by my experience of the caves and also by Native American bison-hide carrying cases called parfleches. These are envelopes, too, in a literal sense: rectangles made of folded hide, painted with abstract designs, and used to store and transport provisions. I have never had the chance to untie and open a parfleche, I only know them from their exteriors, yet the slim, creased interior space implied by these wrapped cases captivate me in much the same way as do the Cappadocian caves.

My Parfleches depart from my usual passion for highly glazed surfaces. They are solid-cast with slip (liquid clay) in flexible molds that are configured to encourage what might be considered technical flaws. In these pieces, the markings and fissures left by their forming process contrast with grid lines that recede into the mass of the objects, aiming for a tension between order and entropy. They provoke me to consider the mysterious interior of a form. 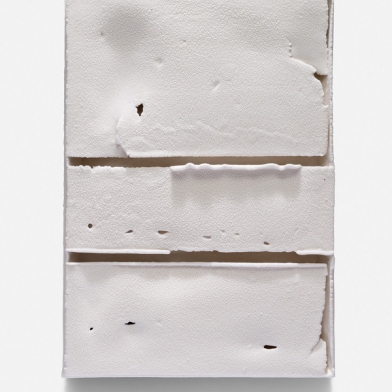 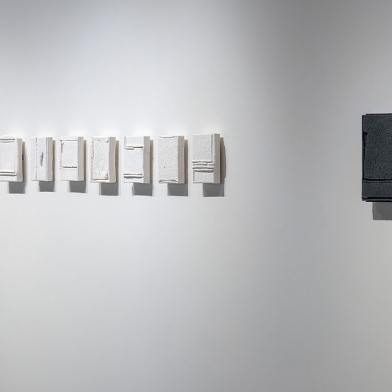