Rabbett before Horses Strickland "Nanabozhoo Lamenting the Loss of the Wolf", oil in canvas, 52" x 40", 2018

Rabbett Before Horses Strickland's paintings introduce viewers to Nanabozhoo, who first appeared to the artist in his dreams. Nanabozhoo is a complex character from Ojibwe mythology, both of the Earth and a creator of all things and creatures on Earth. Possessing supernatural powers, he creates medicines to heal the sick and give assistance to the weak and oppressed. But like humanity, Nanabozhoo has been "subject to the need to learn". Sometimes he is an active participant in the painting; more often, he is a solemn witness. The supreme being for Strickland's Nanabozhoo is the Earth - Gitchi Manitou. Nanabozhoo is an emissary from Gitchi Manitou. He did not come into the world but rather came from it. Both spirit (manitou) and human, Nanabozhoo embodies that which everyone must decide:  are you a part of the earth or did you come from someplace else?

Early in his career, Strickland, studied the forms and the studio practices of European Renaissance and Baroque masters. Using those traditional glazing techniques he marries traditional European techniques/forms together with a classically-drawn subject matter, deeply rooted in Anishinaabe culture.  He lives and maintains a studio near Bayfield, Wisconsin. 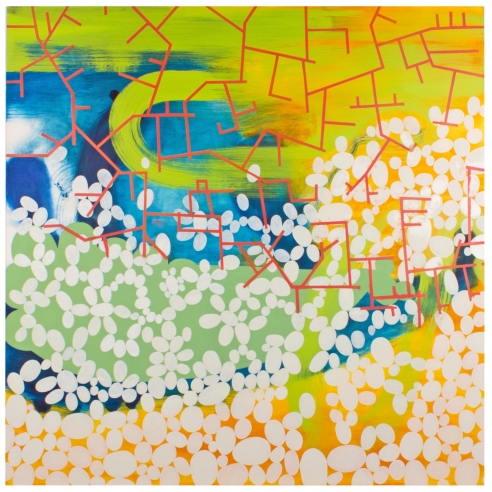